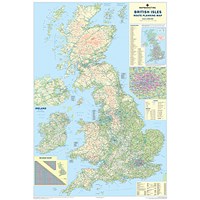 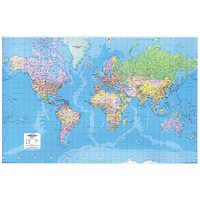 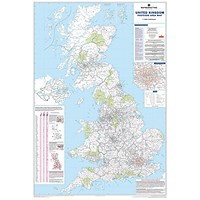 Whether it is used for planning business strategy and world domination, or simply for locating a place of which you weren't sure the whereabouts, wall maps are a practical and, moreover, attractive addition to the office. Wall maps lend to your office a sense of purpose, the feeling that plans are afoot, that your business in intent on expanding. Maps, more banally, look nice as well.

Most of our wall maps are made by the reliable Map Marketing.

What maps have Paperstone got?

When considering the history of maps it should be borne in mind that what we might now consider to be 'maps' may not have been regarded as such by their contemporaries who may have been more concerned with artistic and religious rather than more geographic functions. Nevertheless, if we regard a map as a visual, symbolic representation of the world or cosmos, or parts thereof, forms of mapping can be traced back as far as 16,500 BC. People mapped the heavens before they did the earth and dots which correspond to stars have been discovered in early cave paintings. Much later, in ancient Babylonia, there is evidence that maps were created using surveying techniques.

But traditional European histories of cartography, or map-making, have tended to focus on maps in classical Greece as a starting point. Maps made by figures such as Ptolemy combined the observations of explorers and geometric principles. In fact retrospectively Ptolemy was seen in Europe as a father of mapping and geography but it wasn't until the Renaissance that cartography re-engaged itself with the geometric and astrological concerns that Ptolemy had written about. It was in this period of 'discovery' and colonisation, with the concomitant needs of navigation, that surveying once again became important in mapping. Before the European Renaissance important developments had already occurred in, for instance, cartography in the Islamic world where from the 9th century AD geographers such as Muhammad ibn Musa al-Khwarizmi improved upon Ptolemy's calculations. Maps such as the Tabula Rogeriana by Muhammad al-Idrisi (1154) and European maps from the Renaissance begin to resemble maps of the world with which we are familiar today.

A central problem facing map-makers has been that of projection – how to represent the curved surface of the earth on a two-dimensional plane. All projections distort in some way, whether it be of area, shape, direction, bearing, distance or scale. In 1569 the Flemish map-maker Geradus Mercator produced a map of the world using a projection technique upon which mapping has since been based. Other developments in cartographic techniques, technology and surveying have led to maps which appear ever more 'realistic'.

However, it is important to understand that there is often a political element to mapping. There is, for instance, an obvious ideological function discernible in propaganda maps, maps which highlight or fabricate particular features for a political purpose. In addition, historians of cartography, particularly recently, have also been interested in colonial mapping. Colonial maps represented indigenous land as territory ripe for European appropriation. In addition, in order to map their new territories (which was central to their future administration), colonisers were utterly dependent on the local knowledge of indigenous people who, naturally enough, knew their own land. However, it is clear from these exercises in mapping that at the same time local geography was effectively erased: places were renamed according to European desires and land was represented in terms of (Eurpoean) territory and property.

European maps thus also convey a particular understanding of space – visual, territorial, 'ownable'. However, non-European, indigenous maps have also represented social relations, genealogies and alternative cosmologies. Maps, then, represent culturally specific ways of looking at and organising the world. Further, in the West maps are ubiquitous in culture. They are everywhere – at bus stops, under car seats, in our pockets. It is not unreasonable, therefore, to consider whether maps are not only representations of the world but also help configure our understanding of the world.